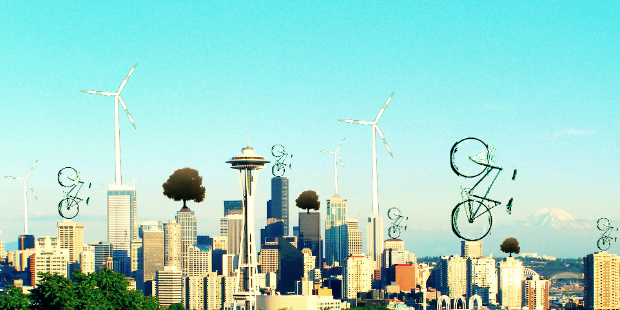 Carbon Neutral Cities – Where? When? How?

The city of Seattle recently announced a new goal for 2050: Achieving complete carbon neutrality. What measures are taken? What other efforts are made globally, in order to achieve the objective of a 100% climate neutral city? In this article, I shed light on the initiatives towards a new, climate friendly urbanity.

First of all, let’s look at Seattle’s definition of “carbon free”. The city aims for a 90% reduction in greenhouse gases in 2050, compared to 2008 levels. Following a gradual approach to the timetable, we can expect a step by step reduction in three stages. All of the following information can be found in the study Getting to Zero:  A Pathway to a Carbon Neutral Seattle (PDF). By 2020, per capita greenhouse gas emissions should be reduced by 30%, ten years later by 60% and finally, in the year 2050, by 90%. This ambitious goal is said to be achieved in three ways:

All three points mentioned above are also being considered in the plans for the zero emission city of Masdar, which aims to acommodate 50,000 people in the United Arab Emirates. The project cannot, however, be compared to efforts in existing cities directly, since it is built from scratch on a desert site. Efforts to ecological urbanity in a somewhat “utopian context” are also known as smart cities, especially when employing new technology. Taking the idea of smart technology even further, a little surrealistic, is the project “The Center” in New Mexico. Although the purpose of this city’s design is testing new technology only, not for people actually living there.

At this point, some of you might remember the auspicious plans for the Chinese eco city of Dongtan. It received some local criticism and has never been realized. Nonetheless, in a Treehugger interview from early 2010, Dongtan’s architectural originators depict similar activities around the world on the verge of being accomplished.

Back to the present. Concerning sustainable building, there are numerous designs for single-family zero emission houses. However, efforts for urban architecture have to go further, beyond individual houses. To cut transport emissions, densely populated areas need short routes. The shorter the distance between living and working, the lower energy use and time consumption for commuting. Combining appartment buildings and offices (shared use) is one solution that works well. The British Greenhouse Leeds, which offers enough room for 350 residents and numerous businesses, shows how this idea can look like in practice.

Architecture definitely is a core aspect of sustainable cities. But not the only one. Carbon neutral cities also require a change in transport infrastructure. Examples for where we are heading can be found in China, where a car free day in more than 140 Chinese cities was conducted last week.

Present activities to promote climate friendly means of transport can also be found in Copenhagen, the city with the world’s highest cycling share. In the course of hosting the cycling world championships, Copenhagen is temporarily closing 70 streets. Not only the action for events, but also every day commuting is bicycle friendly. From the present 37% of all urban routes being cycled, city officials want the share to rise even further: to 50% until 2015.

In an interview, Andreas Røhl, head of the City of Copenhagen’s cycling programme, makes clear what conditions people need for every day cycling. He also stresses one dilemma cycling faces:

Currently, cycling in Copenhagen has a 37% market share and the money we spend on cycling is substantial, but if you compare it to what it costs to, for example, build the Metro, expand a highway, or run our bus system, it’s very, very cheap. And that is good, of course. But the fact that cycle infrastructure is rather cheap also means that we don’t have a separate cycling department under the state with hundreds of people working with huge projects that are extremely expensive. In fact, you could say that the more people that bike, the less there is to earn on building infrastructure. So, as long as something is cheap, there is also less interest in it. Again, it is very positive that cycling is so cost effective, but sometimes one can’t help but think that in a political sense, it would benefit from being more like high-speed rail – incredibly expensive with many interests involved.

On the other side of the globe, and on the other side of the climate policy, there is Australia. You wouldn’t expect a country hosting coal reserves this affluent, not participating in the Kyoto protocol, to make a shift to zero carbon. However, Australia’s capital has a carbon neutral government. All public buildings and street lightning are powered by renewable energy. This doesn’t make the whole city carbon free, but concercing its administration, the city’s use of green energy leads to a 85% cut in GHG emissions. The other 15% are being compensated for with carbon offsetting. Not bad, for a start.

Philippines: Carbon Neutrality by Planting Trees and Lack of Industry

Puerto Princesa, an island city in the Philippines, claims not only to be carbon neutral, but even carbon negative. Not in the far future, but this very year. Very impressive. How it works? A National Greening Program promotes the planting of trees. In Puerto Princesa, 100,000 trees are said to be planted during the next years to catch up with the growing city boundaries. However, on the island there is no industry at all and, to be honest, it is not even a “real” city – 64% of the island area is covered by trees anyway.

Looking at all these efforts, we now have an idea of the measures that are being taken to reduce urban carbon footprints. Nevertheless, claiming to reduce a city’s emissions, one has to be aware of the importance of appropriate data. How do you measure and compare all the greenhouse gases being emitted in an urban area?

Continue to part two, dealing with the complex ways to assess a city’s carbon emissions.

Article image shows the city of Seattle, based on a skyline by dherrera_96, loaded with three icons of sustainability.
see all