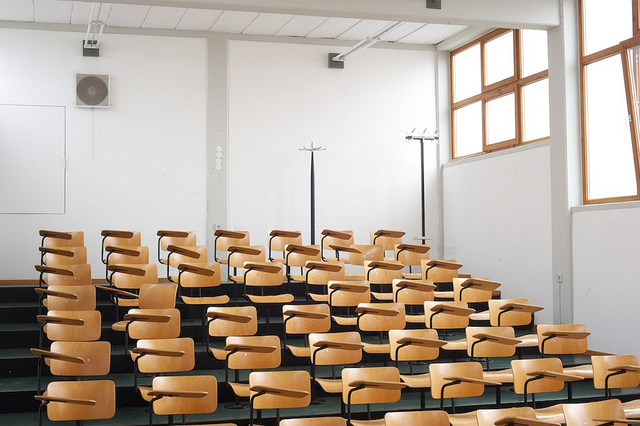 Do Universities Practice What They Preach? On Academic Sustainability

As I wrote in my articles on the future-proof Bachelor and verbiage-free Masters in sustainability, academia is a big driver of sustainable development. However, since we all know that promoting an idea is one thing, but practicing it is another – how’s it look in their own backyard? How sustainable are universities themselves? Who is leading the sector? How can you measure the sustainability of a university, anyway?

In order to become more sustainable, universities have begun to take many measures. To let all stakeholders and especially the public know about these efforts, some institutions have prepared professionally designed sustainability reports that you can download as PDFs, others have entire websites from their sustainability work group. What do these sources tell us about goals and measures?

Let’s begin with the University of Maryland, given the title of “America’s Greenest Campus” in 2009. With the help of a climate action plan collectively developed by 50 students and staff, the University aimed to cut green house gas emissions 50% by 2020 and achieve carbon neutrality by 2050 (in reference to 2005). Among measures like green roofs and a paperless hiring process, agreements to purchase electricity from two off-campus renewable power plants were signed – 13 MW of solar power and another 10 MW of wind energy, both harvested “locally” in Maryland. To augment its climate action plan, the University applied a powerful and yet low-cost instrument that more and more institutions choose, especially those with an extensive list of buildings: energy performance contracting. As page 10 of the 2010 sustainability report (PDF) states:

Energy contracting gives you the benefits of up-to-date building technology through retrofitting them, with no upfront costs. These benefits include better energy efficiency, but, depending on the contract, they can also include better waste management and reduced water consumption, plus all the related cost reductions. It sounds magical until you consider that a big share of the cost savings go directly to the contractor. However, the overall bill is still considerably reduced and, without a doubt, big profits for environment and image are harvested.

In Germany, the Leuphana University Lüneburg was one of the first universities to sign an energy performance contract and, at the same time, switch its energy supply to 100% self-generated renewables. Partnering with Avacon and Cofely, the University is about to build a heat and power co-generation plant fired with biomass-derived methane. Electricity and HVAC for the central building will thus be climate neutral. Excess energy will go to the local grid and neighborhood. Climate neutrality has been a university goal since 2010 and in the past this has been achieved through mitigation via the First Climate company. In 2010, for instance, 1,295 metric tons of carbon dioxide equivalent were offset with an investment in a wind park in Pingtan, China. Last year, a hydro power plant in Karnataka, India, was the subject for offsetting 1355 t CO2eq for Leuphana. In the future, its own renewable energy generation will cut the need for mitigation.

Both universities, the one in Maryland as well as the one in Lüneburg, follow the grade A guidelines from the global reporting initiative (GRI). The GRI standards are the strictest and most extensive ones when it comes to sustainability reporting. In Sweden, this very GRI standard has been mandatory in all state-owned companies since 2008. A Study by Borglund, Frostenson and Windell from 2010 (Mandatory sustainability reporting in Swedish state-owned companies: Perspectives and consequences; Department of Business Studies, Uppsala University (PDF with key findings)) showed that although initially, the additional costs scared some managers, in the long run, the reporting increased awareness within companies and lead to a more structured process management, environmentally friendly purchasing policies and higher standards for suppliers.

Even though, or maybe because, GRI is considered the most complete standard, there are tons of others. Marissa Knodel from Yale University collected and described some used by American universities. According to her, the four, most well-spread “indicators for campus sustainability” include STARS, SCORE, the College Sustainability Report Card and the Campus Sustainability Data Collector.

If your school is confronted with budget cuts, like many in Europe have faced during recent years, and you take this as an excuse for not reporting your sustainability performance, why don’t you let the students do it? The Sustainability Report from the University of Massachusetts Dartmouth (PDF), which also follows GRI guidelines, was collectively made by students in a course on sustainability. This fits into the picture Alexander Scheibner drew for knowtheflow, which illustrates that students are often responsible for changes in sustainability.

Unfortunately, the best universities in terms of academic reputation lack ambitious goals. While Princeton’s central co-generation plant is noteworthy, its emissions standards seem somewhat outdated. As you can read in its 2011 sustainability report (PDF), Princeton’s goal is only to reduce campus carbon dioxide emissions to 1990 levels by 2020 (95,000 metric tons). This is only 17,000 metric tons less than the current amount. New buildings need only achieve the LEED silver standard, but real means to reduce emissions, instead of carbon offsetting, are favored. This still pretty sad situation is only topped by Yale, which, in its 30 page sustainability plan (PDF), mentions lots of plans that are still to be established. The few concrete goals include emitting 10% less carbon dioxide by 2020 than in 1990, which is 43% less than in 2005. In addition, a 25% reduction in solid waste and paper consumption is targeted for 2013, and a comparatively tiny 25% renewable energy share for 2020. New buildings are required to achieve the LEED Gold standard.

Berkeley’s performance is slightly better. Its 2011 Sustainability Report (PDF) includes detailed figures on water usage and GHG emissions by energy type, as well as mode of transport. By 2014, Berkeley aims to have achieved an overall emissions reduction to 1990 levels and climate neutrality is targeted for “as soon as possible”, whatever that means. Zero waste, that is, no material generation that requires dumping in landfills, is the goal for 2020.

Now how do these figures compare to the pioneers in the field? Quite poorly, to be honest. The University of Gothenburg in Sweden (Göteborg) has been reporting its sustainability performance for almost 20 years; you can find the current documents here, which push for a 20% GHG emissions reduction from 2008 to 2025 and for 100% renewable power and heat by 2015. Its Action plan for environment and sustainable development 2011-2015 (PDF) includes concrete objectives, concrete responsibilities that mean practical tasks for specific groups, and indicators for measuring the results.

Practice What You Preach

The universities I mentioned are just a few examples. What they show, however, is that big institutions mainly have four sources of greenhouse gas emissions, and all four of them can be improved drastically. Number one are the buildings. Construction, maintenance, heating, ventilation, air conditioning and other energy consumption – for all of these, high efficiency solutions exist, and any energy should of course be derived from renewable sources. Point two is commuting. How do students and staff get to work? Well-maintained public transport and cycling infrastructure are essential, car pools can be supported by the institution and electro-mobility is an important key word. Point three is travel. Needless to say, video conferences save energy. What’s more important is the question of whether travel by train is encouraged when travel cannot be avoided, or if the possibility of offsetting flight emissions is supported. In any case, we can require every single university that offers even one sustainable development lecture to practice what they preach!