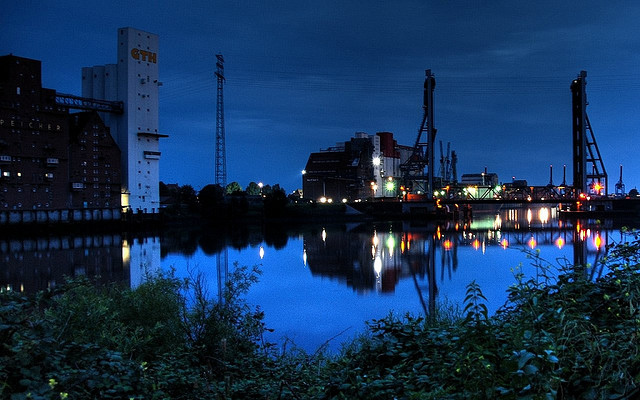 Hamburg, Germany’s second-largest city, saw more than half its building stock destroyed during world war II. The war is way over, but many buildings still tell of its story. A big building-exhibition now displays dozens of contemporary projects that accept the past and envision a conflict preventing future by retrofitting the built-up war and post-war heritage with climate friendly, energy efficient updates. From the exhibition’s pool of 40 buildings and projects only a few of the projects relate directly to WWII history, but all follow one of three themes, the most important being, in my opinion, “cities and climate change”. Let me pick three of the most striking examples for this article: a landfill turned renewable energy provider; a cheap construction, post-war era family home turned climate neutral ecodesign; and a former Nazi bunker that now generates renewable heat and solar power for thousands of households.

IBA Hamburg stands for Internationale Bauausstellung, German for international building exhibition. It lasts until November 3rd, 2013, so if you happen to be wandering around somewhere northern Germany-ish, don’t miss the opportunity to check out the visions of sustainable urban life that have been materialized in these unique buildings. The exhibition has attracted over 200,000 visitors so far, already marking it a success by its mid-point. There is an extensive amount of information available online in English.

For 70 years, the gray hulk of the Wilhelmsburg flak bunker has stood in Hamburg, Germany, as an unofficial memorial to the terrible days of World War II. In 1947, the occupying British Army tried to demolish it, but could barely manage to dent the massive 10-foot-thick concrete walls and 13-foot-thick roof that had already withstood two years of Allied bombardment.

What Randy Woods envisioned quite intensely at Earth Techling, is actually now a reality that stretches far beyond the immediate post-war efforts of the Brits. With rising rents and property values, and the pragmatic historical distance of the third post-war generation, bunkers all across Germany are seeing a demolition wave rolling over them. However, most attempts to demolish bunkers in Hamburg and other cities like Bremen were delayed because normal demolition machinery couldn’t handle the huge dimensions. No matter how long the war may be in the past, it still takes a lot of force and energy to fight Nazi-engineered armored concrete. (For some newspaper articles in German dealing with bunker demolition technical issues and social quarrels, see here or here.) On the one hand, clearing urban areas of the last remnants of the disgraceful Nazi history and making room for contemporary buildings with a higher floor-space index and certain amenities like big windows is quite comprehensible. On the other hand, the bunkers have been standing on their sites for more than 60 years, they now form part of the urban architectural identity, and the embedded energy in thousands of tons of concrete is gigantic. An example like Wilhelmsburg’s energy bunker, displayed at IBA Hamburg, opens the mind for conservation of energy and history, and showcases how alternative uses can work. Another example is the bunker at Hamburg’s Heiligengeistfeld, which was fitted with windows and now hosts offices, cultural venues and night clubs. It is known as the media bunker (picture here).

Wilhemsburg’s bunker dates from 1943. In 1947, after the war, the above-mentioned demolition efforts managed to destroy only the interior floors. Now, as thoroughly documented at iba-hamburg.de, the specific characteristics of the bunker have been turned to good use. The building’s thick concrete walls and a large roof and facade area make it a perfect spot for renewable electricity and especially for renewable heat generation. As the IBA website explains:

Having languished almost unused since the end of World War II, the monument has now been renovated and converted into a power plant using renewable forms of energy, with a large heat reservoir. This supplies the Reiherstieg district with climate-friendly heat, while feeding renewable power into the Hamburg distribution grid.

Despite the visible features of thermo-solar panels on the roof and photovoltaic panels on the bunker’s south facade, what lies at the core of the energy concept is a 2000 m³ hot water tank. It is fed from a variety of sources – “a biomethane-fired combined heat and power unit, a wood combustion system, and a solar thermal unit, as well as the waste heat from an industrial plant” – and it aims to provide the surrounding area with district heat. In the medium run, the reservoir could also store excess energy from wind power plants in the region:

[A]n extension of the project is currently being researched by SMART POWER Hamburg. In future excess wind power from northern Germany could be transformed into heat in the reservoir, or heat from an extra combined heat and power unit could be fed into the reservoir at times of low wind and sunshine, and used to generate electricity.

The photovoltaic panels generate 100 kw peak, which translates into 90 MWh per year or energy for roughly 1000 households under average conditions. The heat system, however, provides 22,400 MWh each year, enough to supply 3000 households. Like its counterpart in the city center, the bunker in Wilhelmsburg hosts cultural space, an exhibition hall, and a cafe.

Another large-scale project on display at IBA Hamburg is the former Georgswerder landfill, where debris from destroyed buildings was heaped after world war II. Later, domestic and industrial waste was also dumped there, piling up to a gigantic environmental challenge in the shape of a hill rising 40 meters (130ft). The project website explains:

In 1979 the landfill was officially closed down, but in 1983 it became clear that highly toxic dioxins were escaping from the foot of the artificial hill and seeping into the groundwater. The landfill and the ground beneath it were made safe at great cost, in close collaboration with the Georgswerder Working Group and residents from the surrounding area.

Making a landfill “safe” in Germany is a matter of installing a sophisticated drainage system to prevent groundwater pollution, a 2 mm thick plastic cover with methane collection, and a layer topsoil. In the 1990s, the first wind turbine was erected there to make full use of the unusual elevation in an area of very flat surrounding terrain. As part of the “energy hill” concept being featured by IBA, a larger turbine and a new photovoltaic system were installed. The old turbine is still operating at 1.5 MWp, the new one achieves 3.4 MWp. Together with the 700 kWp photovoltaic panels, the former landfill generates 12,200,000 kWh of electricity each year, powering 4,000 households. Like the energy bunker, the landfill has important features inside it and it integrates energy cycles from neighboring industrial plants:

The inside of the hill is also a source of energy: continuous decomposition processes produce landfill gas with a high level of methane. For many years this has been systematically collected and supplied to the nearby company Aurubis AG, one of Europe’s largest copper smelters. The seepage water from the landfill and the groundwater are also collected, purified in a controlled process, and drained. A heat pump allows the energy content of the groundwater to be used to generate space heating for the new operations building and information centre.

On a smaller scale, a third example shows how low-quality architectural remnants of the past can be retrofitted in a future-proof way instead of just facing energy-intensive destruction and reconstruction. The LightActive House comprises renovation of a cheap, non-energy-efficient post-war-building under the criteria of ecodesign and integrative energy management. It also tries to give self-sufficient gardening a better outlook through slightly more contemporary design of the beds.

Many more projects worth seeing are already completed or on the verge of completion. They include a five-story building made of wood, an office following the passive-house standard, and one with an energy generating and temperature regulating algae facade (see here or here).

If you make it to Hamburg, and even if you don’t, make sure you let me and our readers know what your thoughts are about IBA and especially the three featured projects.

Article image CC BY 2.0 by Tobias Mandt shows the Rethebrücke, a bridge at the Wilhelmsburg district in Hamburg, where many of IBA’s exhibits stand.