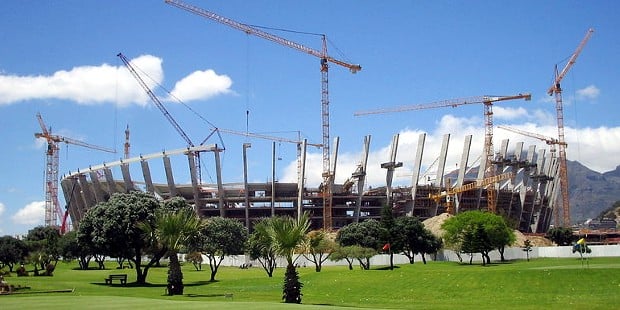 Fancy pictures of green stadiums have been fast to hit the media since FIFA’s decision to give the 2022 soccer World Cup to Qatar was published. FIFA also announced that Brazil (2014), Russia (2018) and Qatar (2022) will have to satisfy green building certificate requirements when putting up new stadiums. Looking at the carbon footprint of South Africa’s 2010 World Cup, however, you learn that the stadiums only accounted for 1.1 percent of the event’s carbon footprint (0.6% for construction and renovation, 0.5% for energy use during the event). Hence, it is clear that better stadium design will only play a marginal role in the effort to significantly reduce the event’s overall emissions. But what would the effective greening of mega events look like? Is it possible at all? In this article, I analyze the carbon emissions of past events in detail, introduce you to the upcoming ones and discuss them all critically.

The overall emissions of the 2010 World Cup summed up to 2.7 million tons of carbon dioxide equivalent. Two thirds of these emissions, 1.8 million tons, were generated by international transport alone. Because airplanes running on renewably refined hydrogen are mere dreams of the future, the only way to reduce this figure is through the individual offsetting of carbon by fans and teams. On an organizational level, FIFA and local authorities should focus instead on the remaining 807,000 tCO2e. That splits up into an impressive 485,000 tons for inter-city transportation (18%) and 340,000 tons for accommodation (12% of the total emissions). Too many numbers hinder fluent reading? Well, the above statistics simply say that almost one third of the CO2 emitted by the 2010 World Cup was caused by people traveling around in South Africa, going from stadium to stadium and sleeping in hotels somewhere. These people include all participants – fans as well as teams as well as staff. However, we have to take into account two considerations to put these emissions into perspective. First, how far would the visitors have been commuting back home in their everyday life if they hadn’t been attending the World Cup? Second, how have investments in improved public transport (in preparation for the event) affected the emissions of the venue cities following the World Cup? My hypothesis is the following: if local governments improve mass transit infrastructure during the World Cup, more people will use public transport after the event. More people using public transport, in turn, reduces future carbon emissions, which has to be considered a benefit of the event. In contrast to this, temporary shuttle buses and investments in road infrastructure will not only generate emissions during the events, but also worsen the situation in the future. Since public transport is not available and distances are large, South Africa’s intercity fan and staff transport was mainly conducted via domestic airplanes and motorized individual transport – the opposite of sustainable infrastructure. That explains the high emissions. How these could have been reduced in the first place is explained by an Environmentalleader article, citing a study by the Norwegian embassy in South Africa. It shows what sustainable investments in transport infrastructure could look like:

Among some of the transportation solutions mentioned in the study are the use of energy-efficient eco-taxis to ferry spectators to the games, the creation of bike and pedestrian paths to discourage the use of automobiles, and increasing the efficiency of existing public transportation options. Using vehicles that run on biodiesel or ethanol were also recommended.

The two main reasons why South Africa’s predecessor, the 2006 World Cup in Germany, was 8-times better concerning its carbon footprint, is that all the stadiums had already been built and fans did not travel as far, or as resource intensively, between cities.

As the Guardian reported, Brazil “wants to organise the ‘most ecological’ global football tournament in history”. From  environmentalleader.com, I learned that this goal is to be achieved with a sustainability budget of 20 million dollars. The event, which takes place in two years, involves the building of new stadiums that, according to  go-green.ae, will apply for LEED certification. LEED is a US rating system promoting energy efficient building design, e.g., the use of daylight and combined heat and power. The Brazil World Cup’s sustainability report has to accomplish the Global Reporting Initiative’s guidelines for event organizers. Apart from the usual GRI contents, these include several supplements, e.g., an analysis of site selection and transportation of attendees. I’m glad that FIFA chose the GRI methodology, because FIFA’s general  sustainability strategy totally lacks content.

The four major host cities where the matches will take place are going to be connected by high speed rail in 2018. So reports inhabitat.com. Apart from this, the local organizing committee plans to create “a sustainable world-class legacy”. And that’s all we can say – there is not much information available about the environmental aspirations of the Russian World Cup.

Qatar, 2022 – A Football Nation From Scratch

Alissa Walker of fastcodesign.com brilliantly reviews, in one entertaining sentence, all the issues facing the small desert state, which lacks any football infrastructure:

If you thought building 12 open-air, air-conditioned stadiums was hard, try shipping them abroad when you’re done. And then try to explain why one of your top architects is called Albert Speer.

She was refering to the unsettling fact that one of the stadium’s architects shares a name with the most infamous Nazi architect from the 1930s. However, it is this very architect who provided the stunning stadium design that motivated FIFA to nominate Qatar. Spiegel Online has an interesting article about him, translated to English. A different design, by Arup, is claimed to achieve zero-carbon by using photovoltaics and biofuel. How you produce biofuel in a desert climate in a sustainable manner, however, still needs to be invented.
Sustainability.com’s Mohammed Al-Shawaf wrote:

The 12 new stadiums will be powered by adjacent solar farms that will convert solar energy into cool air pumped into the stadiums for players and fans alike. The stadiums not only promise to be carbon-neutral, they also will be “packed up and shipped out” after the tournament has ended to provide neighboring (and less-developed) nations a world-class stadium for years to come. And since we’ve all heard how small Qatar is, traversing across the country for matches will leave an inherently small footprint.

However critical the temporary infrastructure (including stadium construction) may be, one thing is clear: emissions from inter-city transport will be negligible, considering the small size of the country.

Original article image by Rotsee2 (Wikimedia Commons). It shows Green Point Stadium construction, prior to the World Cup in South Africa. It is CC 3.0 BY SA and slightly edited by Moritz Bühner.