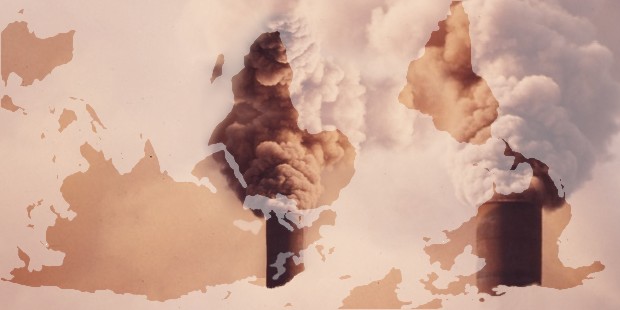 Avoiding the Relocation of Emissions – How to Face Carbon Leakage

In the course of the last 20 years, some of the more developed countries achieved a remarkable reduction of carbon emissions. However, taking a closer look at this, we see that a reduction in one place can be closely correlated to an increase of emissions in another. A scope of “one country” is incomplete, since both goods and emissions circulate all around the world. In this article, I’ll explain the phenomenon of carbon leakage and will suggest ways to assess emissions in a more precise way.

Many western and northern European countries can serve as examples of the above mentioned “carbon reduction”. In total, the 27 member states of the European Union reduced their climate related emissions by 17.8% from 1990 to 2009, as shown in the following graphic (source: Eurostat):

If we want to get a clear picture of how carbon emissions been intentionally reduced in Europe, however, we have to cut out the reductions related to the economic crisis. Eventually, the economy will weather the crisis and quickly reach its pre-crisis emission levels again. Here we see the same graph, only with the period from 2008 on tinted. That was the point when Europe started to be seriously affected by the global financial crisis.

It has to be said that the separation of countries into two different types, developed and developing, is of course an over-simplification. The concept of “development”, as used by many western economists, is insufficient in most uses and is very open to critical discussion. Whatever name you give to the “developed countries” – for instance, “industrial countries”, “western countries” or the “Global North” – it will stay a simplification. I assume that you are aware of the problems related to simplifications like this and I will allow myself to use the term, since, in order to describe the relocation of emissions on a theoretical, “macro” level, it seems to be useful here.

Back to our search for the “real” emissions. Adding to the above mentioned crisis-related temporary reduction of emissions, there is another phenomenon worth noting: the decline of heavy industry in most developed countries only reduces emissions locally. As more and more countries make the transition away from the industrial age to the knowledge and service based economy, heavily polluting  industrial sectors continuously disappear. However, the resource intensity of most western countries does not directly correlate to this decrease. There still is a huge demand for metals, coal and other raw materials – but instead of themselves extracting and fabricating, as they did until the late 1980s, “industrial” countries increasingly import. Strict environmental policies and increasing prices for carbon certificates, following this logic, do not always lead to a reduction of carbon emissions. Ironically, the opposite effect can occur. When pollution and energy intensive industries move from developed to developing countries, the level of environmental protection obviously decreases (which is self-evident, since the aim of the relocation is to avoid strict environmental requirements). As a consequence, global emissions rise – in spite of local reductions in developed countries. Because the translocated emissions don’t appear in the developed countries’ statistics, the phenomenon is known as carbon leakage.

Carbon leakage occurs as energy-intensive activities shift to countries that only loosely regulate or price carbon, if they do so at all.

That is how Bjørn Lomborg put it on  page 307 of his  book “Smart Solutions to Climate Change – Comparing Costs and Benefits”, which you can partly find on Google books here. The actual amount of carbon leakage, he writes, is not clearly assessable:

Although good estimates of carbon leakage have been hard to come by (most estimates suggest about 20% for energy-intensive industries (Metz et al. 2007; Aldy and Pizer 2009), the leakage problem is bound to increase as emission reduction mandates/carbon prices begin to bite in some parts of the world but not in others.

In other words: the higher the prices for emission shares (the stricter the environmental policy), the more carbon leakage will occur. What can we do about this? How can we prevent transnational corporations (TNCs) from relocating their “dirty” production sites to developing countries? The United Nations Conference on Trade and Development (UNCTAD), in its World Investment Report 2010, mentions possible “border adjustment measures”:

There is currently an international debate focusing on border adjustment measures as a possible tool to discourage TNCs’ carbon leakage-related relocation strategies. Such border measures (e.g. tariffs, taxes or other levies) could help create a “level playing field” between domestic goods, whose producers are subject to stricter emission regulations and imported goods whose producers abroad are not confronted with extra carbon-related compliance costs.

Policy designed to protect certain markets has its unavoidable downsides. Above all, economists criticize the inefficiency of regulation. From a business-running point of view, many are also dismayed by the administrative outlay. The WTO has its word to say, too. Hence, the idea of border measures is not unproblematic.
What else can be done to limit carbon leakage? Let’s read on in UNCTAD’s World Investment Report:

Instead of addressing the issue of carbon leakage at the border, it could also be dealt with at its source. Regulatory options in this regard include building on TNCs’ investment decision-making and corporate governance mechanisms, through improved environmental reporting and monitoring.

How nice that sounds! Face a problem at its source. Of course! However, “regulatory options” don’t sound very sexy. Isn’t there an option where both the global citizens and the emitting companies benefit? Yes, concerning investment decisions, and especially guiding them toward green investments, there is lots of room for improvement. From my point of view, the best starting point, unlike UNCTAD’s call for monitoring by the state, is a full understanding of the company’s production system on all levels of the value chain. This understanding can best be carried out by conducting a life cycle assessment of the company’s products. To start with, “simplified LCAs” that address one form of pollution only, like product carbon footprints or water footprints, can be a good choice. They can still be combined with monitoring measures by the state, once carried out. If you know where your parts come from and exactly how much negative environmental effect has been emitted at every stage of the product’s life cycle, you have the best base for sustainable emission reduction – wherever the production site might be.

Image by Moritz Bühner, based on this Wikicommons image of a steel plant chimney in public domain.